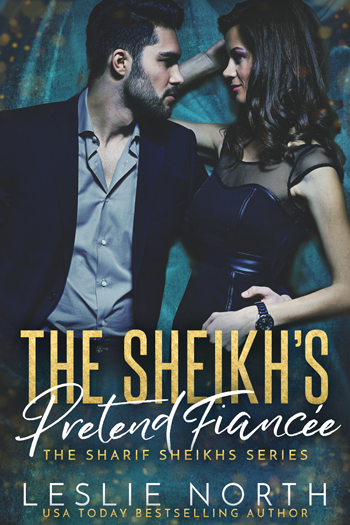 Liyah Reed returns to the Middle East hoping for something more than her humdrum life back at home, but what she finds is beyond her wildest dreams…

Five years after her first stay as a foreign exchange student, American librarian Liyah returns to the Middle East. The move goes against her practical nature, but even a plain jane like herself sometimes thirsts for adventure. When a favor for a friend thrusts her into the path of beguiling billionaire Asad Sharif, Liyah’s sensible life may become something far more…sensual. Liyah is ensnared by Asad’s seductive charm, but she’s way out of her depth. However with a push from Asad’s meddling sister, Liyah is soon leading the lavish lifestyle of a sheikha.

Billionaire businessman Asad Sharif has willing women falling at his feet on multiple continents, but what he needs is a wife…or at least the appearance of one. To convince investors that he’s a dependable man, what Asad needs is a fake fiancée. The bookish American Liyah is the perfect choice, and when she accepts his pretend proposal, Asad’s sister is eager to help Liyah look the part. When his shy wallflower unexpectedly blooms into a stunning beauty, Asad will have to work doubly hard not to lose himself in Liyah’s strawberry blonde hair and enticing curves.

In the playground of the wealthy Middle Eastern elite, things are getting hotter than ever for the sheikh and his would-be sheikha, but all fake marriages must eventually come to an end…

Grab your copy of The Sheikh’s Pretend Fiancée at:

She made sure her smile was firmly in place and approached the table. “Hi. So I told you that your server would be here momentarily,” she said. “This is Fatima, and she’ll be waiting on you.”

“No,” Asad said suddenly. “We’re happy with you. Thank you.”

“She doesn’t even work here,” Fatima said with a coy smile. “I know this place inside and out, and I promise that I’ll take good care of you.”

The whole table went quiet, and they all looked at Asad. He studied Liyah intently, and once again, she had no idea what the man was thinking. “You don’t work here?”

“No. My friend works here, but they were busy, so she asked me to fill in. Now that Fatima is here, I guess I’m not needed anymore.”

“Good,” he said abruptly. “Then you can join me for a hookah on the patio.”

Liyah felt a flush creep up her cheeks. It wasn’t at all like her to fall apart when a man paid attention to her, but here she was, practically melting under those smoldering green eyes. “I was just helping out,” she said faintly.

An amused smile curved over his face. “You said that.”

“Family. They’ll be fine without me.”

What was she saying? What had he asked her? Weakly, she pointed to Fatima. “She was delayed.”

“Naturally. So technically, you don’t work here—which means you came here to enjoy yourself. Let’s go and make sure you enjoy yourself.” He stood. “We’ll take the chocolate flavor.”

Fatima’s eyes shot daggers at her as Asad gripped her elbow and led her to the patio.

She tried to look for Mila, but her friend was nowhere to be seen. Relax, she chided herself. She was supposed to mingle with the locals.

The booth around the hookah was illuminated by a sunray pattern of candles. He lifted an eyebrow when she sat across from him rather than next to him, but he didn’t say anything.

Fatima returned shortly with the mouth bits for the ornate contraption and added the tobacco. She shot Liyah a venomous look.

Asad nodded his head, and Liyah hesitantly put the mouthpiece up to her mouth and inhaled sharply.

“Slowly,” he advised. “You want to inhale slowly. You’ve never done this before, have you?”

“Yes. I was here five years ago for school, and I enjoyed myself, but I wanted to come back and experience it as an adult.” She tried inhaling it slowly under his watchful eye, and this time, she tasted all the mingling flavors before exhaling the smoke. Smiling, she watched it rise into the air before dissipating. “Your name is Asad, right? I heard your brothers say it. What do you do?”

“Typical American,” he chuckled. “Always want to know what a person does rather than who a person is. I’m a businessman. Why did you want to return as an adult?”

Clearly, he wasn’t interested in talking about himself. She was struck by how different he was out here. Inside, with his family, he seemed stiff and rigid, but out here he was charming and relaxed.

“Who wouldn’t want to return? Dubai is the romance capital of the Middle East,” she sighed. “Your literature is sultry. Your architecture is stunning. Your artwork is like no other. I graduated college and found myself floundering a bit. My friend had returned here several months ago to stay with our exchange family, and she told me I should join her. I’ve only been here a couple of weeks, and I’ve spent most of that looking for work, but I think the city will help me get a perspective on my life.”

“Yes, I was hoping to get a job at the library or as a literature or language tutor, but there doesn’t seem to be any openings. I think Mila could always get me a job here.” She shrugged and inhaled again.

“Dubai has a few secrets that only the locals know,” he said with a wink. “Maybe I’ll show them to you sometime.”

What secret is Asad hiding? Find out in your copy of The Sheikh’s Pretend Fiancée today. It’s available at: