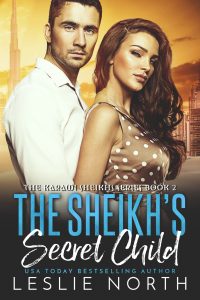 As an ambitious American journalist, Amy Mathewson will stop at nothing to get her story—including going into dangerous, rebel-infested countries. But when she stumbles across seven-year-old Aisha in an orphanage her heart melts, and Amy vows to keep her safe.

Until the rebels start to close in.

Just when Amy thinks they’re in grave danger, a stunning Sheikh arrives, claiming Aisha as his daughter; a Sheikh with smoldering dark eyes and the kind of handsome that is difficult to forget. Unwilling to let Aisha go with a stranger, Amy agrees to accompany the Sheikh and Aisha to a safe house to confirm his claim. But it may not be safe for Amy, not with a sexy Sheikh making her feel things she hasn’t felt in a long time—and whose touch is as hot as the desert sun.

All his life, Sheikh Bahir Karawi has taken care of himself, knowing no one else would. When he discovers he has a daughter, he immediately sets out to bring her home, to make sure she never feels as alone as he always has. What he doesn’t count on is butting heads with the fiercely protective and dangerously beautiful Amy, who has taken up the duties of caring for his daughter. As they get to know one another, he can’t ignore the searing attraction he feels, nor the realization that Amy would be perfect, both for his daughter and for him.

As the rebels close in, Bahir realizes he will do anything to keep his daughter and Amy safe—even if that means putting his very life at risk.

The Sheikh’s Secret Child is available from: