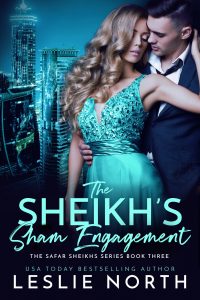 Nasser Safar isn’t what you’d call a long-term man. Over the last few years he’s been raising funds for an education initiative for his Tribe, and while he’s still focused on that, he’s also been playing the field—trying to outrun the memory of the woman who left him. She chose her love for her sister over her love for him. It’s a wound that still haunts Nasser, even while he continues the education project that had been their shared dream.

Willow Everstone left the only man she’d ever loved after he’d given her an ultimatum: stay with him, or return home to her family. It was the hardest decision she ever had to make, and in the end she lost her chance at a future with the love of her life. Now, with her family situation stable, Willow is ready to follow her dream of bringing education to all parts of the world. Her first project? A newly minted international initiative…in Nasser’s country.

Neither Nasser nor Willow are happy having to work together to create the Tribe’s new school. But when a visa issue almost kicks Willow out of the country—leaving her education initiative in limbo—Nasser offers an unconventional solution: a fake engagement. Despite their earlier reluctance, the marriage of convenience soon turns sultry glances into steamy nights. And when a surprise baby calls the “fake” part of their plan into question, they’ll have to decide if they’re willing to give their second chance at love a fighting chance, or leave their blossoming future behind.

The Sheikh’s Sham Engagement is available on: