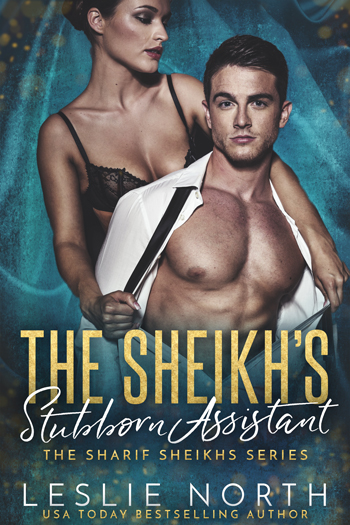 American college grad Katie is as ambitious as she is creative, so when she learns of a friend’s brother who owns an art gallery in Dubai, she leaps at the chance to jumpstart her career in the luxurious city. But her dream job quickly becomes a nightmare when she discovers her new boss is as unpleasant as he is handsome. Khalid Sharif may make her pulse race but not even his dark mystique, lithe muscles and ridiculous wealth are enough to make up for his rudeness. Katie won’t back down though, and she won’t quit until Khalid realizes exactly what she has to offer.

Some say Sheikh Khalid Sharif has more love for art than for people, but he never concerns himself with the opinions of others. He’s determined to expand his gallery into one of Dubai’s greatest museums and nothing will get in his way—not even his fire-haired new gallery assistant. Khalid knew it was a mistake to hire the Western woman—the determination in her amber green eyes is a distraction, and her striking beauty practically makes his blood boil. Despite this, Khalid refuses to let Katie alter his course.

As Katie and Khalid continue to clash, their attraction simmers just beneath the surface. But is it enough to melt Khalid’s icy exterior or will Katie be left out in the cold?

Grab your copy of The Sheikh’s Stubborn Assistant at:

After finishing her champagne, she went in search for a tray to deposit her glass. Catching sight of a white-coated servant from the corner of her eye, she whirled toward him—and bumped into a hard body.

“Excuse me,” she said immediately, and when her gaze flew up, her heart skipped a beat. The man was tall with perfectly sculpted cheek bones, dark swept-back hair, and familiar beautiful moss green eyes.

The elusive Khalid Al Sharif. Katie had seen him at the wedding, but they hadn’t been introduced, and she hadn’t laid eyes on him since.

“No harm,” he said softly as he reached out to steady her. He plucked the glass from her hand and replaced it with a new glass when a server walked by.

“I’m Katie.” He smiled politely, and she rushed on, the words tumbling out as if beyond her control. “I’m staying with Sahaar on a work visa. I was admiring the artwork in the palace. Your brothers tell me that you are responsible for the new acquisitions. You have excellent taste.” She managed to stop herself—she hated babbling!—barely restraining a wince.

He didn’t seem to notice her sudden attack of nerves but narrowed his eyes and studied her intently. “You were also an exchange student?”

“No. I’m not part of any student program, now or in the past.” She smiled and tried for a casual tone. “I know that’s how Mila and Liyah met. I’m brand new to the city. Sahaar was recommended to me, and she graciously accepted me into her home.”

“I see.” He pulled out his phone and glanced at it. “Ah,” he said. “That’s an hour.” He put the phone back in his pocket and met her curious gaze. “If you’ll excuse me, I have better things to do. Please do not tell my sister that you saw me. I’d prefer it if she didn’t get any ideas in her head.”

Rather than answer, Khalid turned and walked away.

“Rude, much?” she muttered after him as she wrinkled her nose. Asad and Rashid were so friendly. What had happened with the youngest brother?

How rude! What’s happened to the youngest Sharif brother? Find out in your copy of The Sheikh’s Stubborn Assistant! It’s now available at: