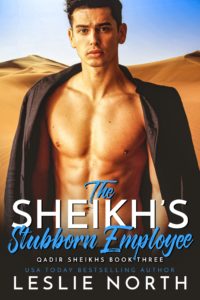 Emily Baker is in a heap of trouble. Her beloved horse farm is struggling financially, and she’s just found out her late father sold her favorite horse to a sheikh from a country she’s never heard of. The buyer, Zaman Abdul-Rahman is sexy as all get-out, the sort of man who makes a fling with a sheikh seem like a good idea. But Emily isn’t looking for romance, and certainly not with the overbearing alpha male who shows up to take away her beloved and pregnant horse, Riah. Emily refuses to let him until Zaman makes her a generous offer: he’s taking Riah, but he’ll also buy another horse and bring Emily to Qadir for six months to train it for an important race. Despite her hesitation, Emily knows the influx of cash will be enough to save the farm. Before she knows it, she’s traveling to the tiny kingdom and being seduced, not only by this beautiful foreign land but by Zaman, who’s just too gorgeous to resist.

Zaman isn’t the sort of man to fall for a woman, especially one with such a fierce streak of independence. But he can’t help being wildly attracted to the beautiful American, and he secretly admires her strength and intelligence. Emily will only be in Qadir for six months, so what’s the problem with giving into their searing passion for a short fling? After all, he’s an expert at not growing too attached to anyone. This time, though, things are different. Emily is different. Maddeningly hard-headed. Thoroughly lovely. And…pregnant with his child.

At the news, Zaman’s world shifts dramatically. His protective instincts kick into high gear—and end up pushing Emily away. It soon becomes clear, though, that the only race he wants to win is the one for Emily’s heart…

The Sheikh’s Stubborn Employee is available on: