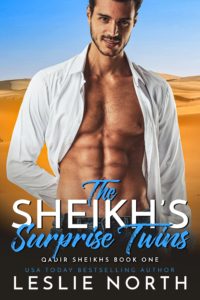 Holly Remington can’t believe the burning chemistry she feels with Sheikh Malik Abdul-Rahman. It’s like getting knocked in the head with a baseball bat—except far more pleasant. Though she’s supposed to be all business while her company tries to win a lucrative development contract in the oil-rich country of Qadir, Holly simply can’t stop herself from happily succumbing to his charm. When she’s called back home after her father suffers a stroke, thoughts of her sheikh romance are never far away. It’s only when she’s ready to return to Qadir to continue her work that she discovers Malik gave her more than sexy memories. She’s pregnant—with twins. And when she sees him again, Malik makes it painfully clear he’s not only rejecting her development proposal, he’s not interested in any other formal proposal either. He wants all of her.

But Holly isn’t sure that’s available, or ever will be.

Sheikh Malik has never reacted to another woman like he does Holly. She’s all business—at least in the beginning—and he finds himself oddly compelled to get to know her other side. Intimately. When he finds out she’s pregnant with his children, he finds himself wanting her more. But when Holly begins to talk about how she wants to develop his oasis herself—the one that her company had been desperate to buy and the very one his mother loved and hoped one day would belong to Malik’s future wife, he pulls the breaks on their whirlwind romance. How can he love a woman who seems so out of touch with everything he values?

And yet, how can he not love the only woman whose ever touched his soul?

The Sheikh’s Surprise Triplets is available on: