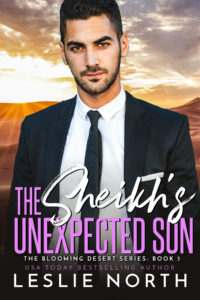 Annalise “Lise” Danbury spent a wonderful, whirlwind two weeks with Bahir Al-Masri, a gorgeous and sexy man she met at the London university where she teaches languages. Then he went home, with only an “it’s been fun.” But he left more than just an angry woman behind—he left her pregnant. Traveling on business to Qasha two years later, she sees Bahir again. Only “Bahir” is really billionaire sheikh Raed Al-Qasha. And he’s just as stunned to find out he’s a father. Making matters worse, Lise is finding it impossible to ignore their attraction, even though she’s still steaming mad.

Raed never forgot Lise and his guilt at leaving her nagged him long after he returned home. But he pushed thoughts of her away, knowing nothing could ever come of their relationship. If he married, it would be for strategic reasons, someone who could help him build his philanthropic foundation on an international scale. Which is why seeing Lise again has him torn. Having an old fling and an illegitimate child around might create a scandal that could destroy his efforts, yet he can’t deny the attraction they still have. Thinking to keep Lise and his secret son out of the spotlight, he requests they live in the royal palace and lures her by saying she can use his staff in her language-teaching pilot. Big mistake. It isn’t long before the two give in to their desire, complicating all his plans. Lise is nothing like the woman he envisioned marrying. But she just might be the woman he needs…

The Sheikh’s Unexpected Son is available from: