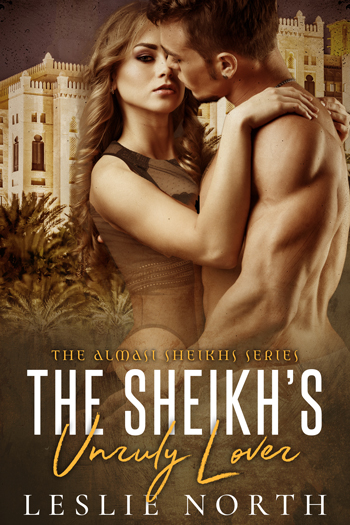 Sheikh Omar Almasi is dark, broody and definitely not the perfect prince charming… but being perfect isn’t sexy and definitely won’t drive you wild (or to mind-blowing ecstasy)!

I hope you’re as breathtakingly excited to read the sultry, steamy next chapter of the Almasi Sheiks as I am to share it with you!

Locations as hot and exotic as the men who inhabit them…

Men as stubborn as they are sexy…

Romance and passion that won’t be ruled!

Join Sheikh Omar Almasi as he tries to tame the American executive driving him wild!

Grab your copy of The Sheikh’s Unruly Lover at:

Following a recent merger, American executive assistant Marian is sent overseas to meet with her company’s new Arab business partner. But once Marian sees who she’ll be working with—the handsome Sheikh Omar Almasi—she’s instantly wary of his good looks and brooding demeanor. When circumstances force her to step into her boss’ shoes, Marian is more than ready to prove she should be taken seriously…even if it means working side by side with the surly, sexy sheikh.

Two years after losing his wife to cancer, Omar is more driven than ever in his family’s oil business. He opposed the merger with the US tech firm, and now that it’s done, he refuses to compromise himself for corporate Americans. But Omar is caught off guard when he meets beautiful, business-savvy Marian. The woman drives him wild with her stubborn determination and her distracting allure. He’s never had to work so closely with someone so…feminine, and the more time they spend together, the more he has to fight his impulses.

Soon their attraction is undeniable, but with the wound of his wife’s death still not healed, Omar may never be ready to move on…unless Marian can show him how to love again.

The taxi driver pulled up to a tall building, encased in reflective blue panes. The bottom level was a restaurant—she could see the maître d’s stand as a well-dressed couple entered. As she stepped out of the taxi, which Omar insisted on paying for, Marian craned her neck upward to see what lay above.

“Oh, please.” She waved her hand at him as they strutted toward the front doors. “You look like an off-duty underwear model.”

Omar lifted a brow at the same time her words crashed around her. Jesus, Marian, could you get a filter? She opened her mouth to smooth it over, but found nothing waiting on her tongue.

He opened the door for her, an amused air lingering between them. As they approached the podium, his hand found the small of her back. She relished the jolt of electricity that coursed through her again, made her toes tingle.

Omar spoke to the hostess, and soon they were seated at an intimate table for two along the front windows, overlooking the busy street. The glass was tinted from the outside, so they could peep out on the world in peace.

“This will be fun,” Marian said, settling into place. She smoothed the napkin over her lap in preparation. “We get to comment on everybody’s fashion choices without them knowing.”

“So you’re a voyeur,” Omar said, his eyes glinting.

“Maybe,” she said, teasing. “Important things to know about your business partner.”

Will Sheikh Omar tame this wild beauty? Find out on your e-reader today. The Sheikh’s Unruly Lover is available at: