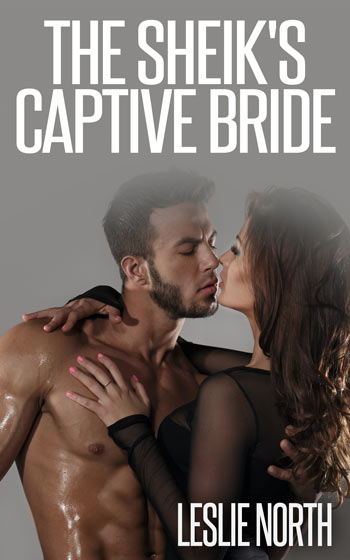 After being taken hostage by Kamal’s enemies, Kamal entrusts the Head of Palace Security, Talib, and Erin’s personal bodyguard, PJ, to recover his captive bride.

When PJ is sent to retrieve Erin the last thing she expects is to fall for her partner. Talib is dangerously handsome, with a deep tan, luxurious black hair and piercing brown eyes. He is a man used to being in control and gives off an air of effortless authority. And when his hands touch her, PJ feels an unstoppable attraction from deep inside. Even his scent overloads her senses and made rational thoughts difficult. This mission was going to be very frustrating.

Talib has never met a woman like her. Her American ways confuse him: her lack of respect for tradition, appropriate clothing and feminine behavior causes them to clash. But he soon finds she has unexpected strength, a fire that challenges any man who thinks they’re better than her. She is tough, strong and never backs down from a challenge – even if that challenge comes in the form of a gorgeous 6’5″ man. He wants her to surrender to him, but it may be him doing the surrendering.

However both of them will have to hold back their attraction until the mission is completed. Any relationship between them is strictly forbidden. It’s a race against time to locate Erin and bring her back to Kamal. Every second Erin gets closer to the border and the chances of rescue get slimmer and slimmer.

The Jawhara Sheikhs series is also available as a boxset from Amazon, GooglePlay, iBooks, Nook and Kobo.

PJ Williams pushed her hands through her shoulder length, blonde hair in frustration, “What are we missing here?” She stood on top of the Humvee looking out over the refugee camp, feeling completely useless and inadequate – neither feeling something she was used to dealing with.

While her statement had been said to no one in particular, the handsome man in charge of security in Jawhara answered her. “We will find her.” Talib had to believe that because to do otherwise would be failure and that was something he never did.

Gesturing to her com unit, PJ looked at him and replied, “They just finished searching the last tent, and they found absolutely no sign of Miss Malone in any of them.”

Talib nodded his head, “I received the same report. I’m pulling up the satellite feeds from the last two hours again.” Talib turned back to the small laptop he had braced upon his lap, “If Miss Malone’s not in the camp, she has to have been taken across the border. There’s no other place for them to hide her.”

PJ turned and looked at the expanse of desert sand that stretched towards the neighboring country, “How far is the border?”

“Is it all flat like this?” PJ asked, indicating the current landscape, which was flat with only a few small dunes in the nearby distance. Her mind was already beginning to spin with renewed hope. If they had taken her from the camp on foot, they could easily be overtaken in vehicles.

Talib shook his head and set his computer down before walking towards the vehicle. Climbing up, he joined her on the vehicle’s hood before physically turning her ninety degrees to the right. Pointing towards the north, “There are mountains that way, filled with caves and used most often by the nomadic peoples. To the west, there is nothing but sand and sun. Only a fool would venture off in that direction.”

PJ quickly put the pieces together, “So, whoever took her is heading to the mountains.”

“So, why are we still standing around here? Why not go after them?” PJ turned, surprised at how close Talib was to her. Close enough she caught a whiff of his spicy cologne and could feel the heat coming off his side.

Swallowing, she tipped her head back and met his eyes beneath her sunglasses, “If we know where they’re going, why not head them off?”

Talib met her gaze, wondering what color her eyes were beneath the mirrored glasses she wore. Time enough to find out later! After you find Kamal’s bride! “It’s not that simple and you know it.”

Talib jumped down from the vehicle before reaching up to assist her.

PJ considered him and then nodded, “Yeah, I know it isn’t. I just wish it were. So, you’re the one with all the answers. What do we do now?” PJ allowed him to place his hands upon her waist and help her down from the hood of the Humvee, ignoring the way her body came to life at the mere touch of his hands. Get a hold of yourself! Sure, he’s exactly the type of guy that makes your mouth water, but this is neither the time nor the place! PJ smoothed her hands down her legs, refocusing her mind on the task at hand.

Talib didn’t miss the snarky attitude and while he didn’t approve of it, he also had to give her marks for fighting to maintain control of the situation. “We look over the satellite feeds and hope we can pinpoint where they’re headed. We also hope they contact the palace soon with their demands.”

PJ looked at him from the corner of her eye, “The Sheikh would negotiate with them?”

Talib smirked at her, “To a point. He might appear to be cooperating, but only until he could assure himself of Miss Malone’s safety. After that, he’ll move heaven and earth to avenge himself. Any threat against the royal family, extended or otherwise, is punishable by death.”

PJ swallowed before asking, “How?” Did they shoot them, or stone them to death? From what she’d seen, some parts of Jawhara still seemed pretty archaic to her.

PJ looked at him, waiting for him to elaborate, but he didn’t. “Wow! Just like the Old West.”

PJ waved him off, “Sorry! During the early years of America, cowboys and settlers used hangings quite often.”

Talib grinned, “Yes, I remember reading some of the literature from that time period. Very interesting how they meted out justice, although, I personally believe a bullet would have been much faster.”

PJ grinned at him, “Funny, I’ve always thought the same thing myself. I believe they were aiming for the drama as a way to deter other would-be criminals from going down the same path.”

Before Talib could reply, his laptop buzzed notifying him the satellite images were ready to be viewed. PJ stepped closer to him as he pulled up the images from the last two hours and began to scroll through them.

She watched the images, scouring them for any signs that humans had travelled back across the border. When nothing showed up, she mentally cursed and huffed out a frustrated breath.

Talib looked at the young woman standing close enough he could smell the scent of her shampoo – lemon and some herbal scent he couldn’t immediately identify. It smelled fresh and somehow seemed to fit with her image. Watching her, he waited for her to lift her head and meet his eyes before he spoke, “Do not give up. We will find her, we just haven’t looked in the right place as of yet.”

The Jawhara Sheikhs series is also available as a boxset from Amazon, GooglePlay, iBooks, Nook and Kobo.