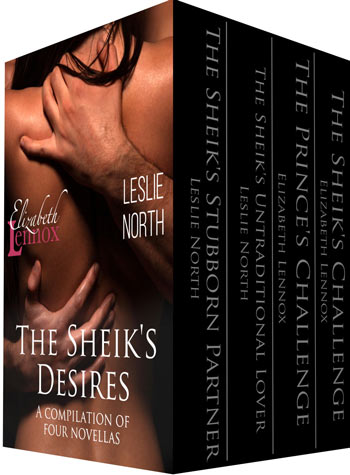 I’m very excited to share with you ‘The Sheik’s Desires Boxset’, a joint project that I and the extremely talented and lovely Elizabeth Lennox having been working on together! Get ready to meet four dominant and sinfully sexy Sheiks and the sassy women who they fall for.

Get four breath-taking sheik romances from two of your favorite authors – all in the same boxset!

The Sheik’s Challenge by Elizabeth Lennox

When she sings, she sounds like a cat in heat…but Ana, a brilliant mathematician, stuns and surprises Najid del Sabur, Sheik of Safir. Her bright eyes defy him and her smiles sooth him, while her body makes him lust for her. But can he catch her? Can he convince her that her past won’t hurt their future?

The Prince’s Challenge by Elizabeth Lennox

She can’t sit still. She’s beaten every nurse and doctor on her floor at cards. And she’s achingly beautiful. But is she friend or foe? Having been caught in the line of fire by a bullet meant for his brother, Prince Jual del Sabur, Minister of Defense for Safir can’t decide if the lovely Sonya was part of the assassination attempt or innocent and just caught by bad timing. All he knows is that he is definitely caught by her startling eyes and her soft sighs as he explores that question.

Ultra-traditional and devastatingly handsome Prince Zafar Tadros thinks a business/sports complex is not what is needed for his country—but he believes in helping his family. With the region increasingly doing more business with Western companies, his father Sheikh Ahmadi has ordered this new business/sports complex to be a mix between West and East cultures.

Zafar has decided he will work to integrate as much traditional elements as possible, but Belle Mooney, an innovative American architect has taken her direction from Zafar’s father and is going for innovations. The two clash over designs—and only one can win.

With the deadline fast approaching, playboy Prince Adyan Tadros must supervise the only construction company that will take on the job of building the business/sports center in less than six months. The meticulous Edna Abbey has taken over her father’s construction company while he recovers from a stroke, and the last thing she wants to do is rush the project. But with attraction between her and the Prince growing everyday, she may be glad for the distraction…

Get four sizzling Sheikh novellas on your eReader today, available on ALL major stores:

Exclusive Excerpt From The Sheik’s Untraditional Lover by Leslie North

Belle Reynolds could feel her cheeks warming. How did she get herself into these things?
It was obvious that Sheik Zafar hadn’t been told that she was to be the lead architect. It was equally obvious Zafar wasn’t happy about it, but his dad seemed more than pleased.
Sheik Ahmadi looked a lot like his son—both tall men, lean and handsome. Zafar was a touch taller than his father with dark hair that curled slightly on the ends and golden eyes that reminded her of a lion. A little too much like a lion since he left her feeling like a fat zebra he was watching with a mixture of animosity and calculation. He was watching her with a mixture of animosity and calculation. Well, if he thought she could be intimidated, he was wrong. She wasn’t going to be a zebra, she’d turn herself into one of those ugly wildebeests who could best a lion. She had to stifle a snort at the idea.
Zafar shot her a narrow-eyed glance, as if he disapproved of levity, but he turned to the sheik. “Father, it is good to see you so early in the day. You don’t often take breakfast.”
“We don’t often have such a charming guest in residence.” The sheik seated himself. Zafar filled a glass with coffee from a carafe, and Belle sat down again, too. She was still trying to figure out the dynamic here.
Zafar Tadros was one of the most gorgeous men she’d ever met. He had a classic profile—straight nose, strong jaw and high cheekbones. Hollywood would love him and those dark, brooding good looks. One glance at him and her heart had started pounding like she was a high school girl gazing at her first crush. She’d told herself to get it together, get over it and get to work. Work was what mattered—she had a chance to prove herself here and she wasn’t going to blow it.
She took a short breath now, smiled, and ate another date even thought she didn’t really like them—too sweet and sticky. She also gave Sheik Ahmadi a long, assessing glance—he was going to be her supporter, even if Zafar looked like he wanted to pack her bags and ship her home on the next flight out. “I’m ready to get to work right after breakfast,” she offered, hoping that would get her mind back where it was supposed to be. On work. Not on Zafar and the muscles she could see under that tight T-shirt of his.
Sheik Ahmadi rubbed his hands together. “Excellent. We should talk about some preliminary ideas and schedules. I think a week is good for you two to come up with initial sketches. Old and new. That is what I want to see. We want a complex that is so compelling even movie firms want to film there—it must become an icon of all that is good in Scaran. Our traditions and our future!”
Belle watched Zafar’s face go from suppressed anger to calculating. When she met his gaze again, she saw a look in his eyes that sent a shiver down her spine. He was plotting something—and he’d just dismissed her as any kind of problem.
Well, this problem would not be easy to solve.

Get four sizzling Sheikh novellas on your eReader today, available on ALL major stores: