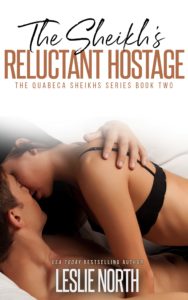 Saja has finally met her match.

She can’t deny her attraction for Prince Basil Al-Qadir. She has never felt so vulnerable around her towering lover. He makes her go weak at the knees with just a touch or a kiss. When he spoke in his deep, husky voice everyone listened. He was a man to be respected – but that didn’t matter to Saja. She wasn’t afraid to challenge a Prince.

Nobody has ever stood up to the Prince before – least of all a woman, even if she is stunningly beautiful. Saja’s stubbornness and refusal to submit to traditional standards only escalates his interest in her. But as a sworn bachelor, he never usually keeps women around long enough for anything emotional to develop – but Saja is different. He has never felt such a strong attraction to a woman before. The Prince is letting his walls down for the first time and every day his feelings for Saja grow deeper and deeper.

Then Saja is ripped from his life and held hostage by his sworn enemy. After finally finding love, will the Prince be able to rescue his bride?