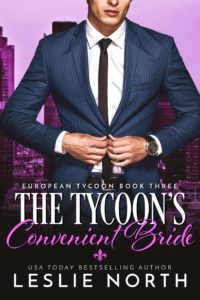 To billionaire Anthony Charles Harrington V, everything is about business. Including marriage. All he needs is a society wife who will give him an heir and he’s completely prepared to marry a woman he doesn’t love or desire to secure his fifth-generation company’s future. Until he meets Diana Tinsley. She’s quirky and the kind of free spirit he’s looking to spend time with before he settles down. Using all his considerable charm, he convinces Diana to have a one-week fling, just a lark with no strings attached. But when Diana shows up at his door two months later, he realizes their “no-strings” affair will have long-term consequences: Diana is pregnant. Nothing could be more… perfect. He’ll get his heir, get his wife, and focus on his business. He just needs to get Diana to agree to a marriage of convenience.

Diana is reluctant about the marriage idea at first. She can’t imagine giving up her job as a nurse to become a society wife, but eventually her practical side wins out. Her child will have a secure future and she’ll be able continue her life as usual. She doesn’t count on her attraction to Tony—which was already fierce—growing even hotter. Worse, she thinks she might be falling in love, which was totally against their agreement. This marriage of convenience isn’t turning out to be as convenient as she’d thought it would. Just when she believes the two of them might have a real marriage, Tony brutally reminds her that love is not an option. But running away doesn’t seem a workable solution to her problems… or is it?

The Tycoon’s Convenient Bride is available on: