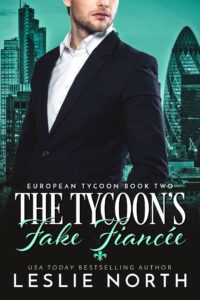 Reclusive billionaire inventor Gavin Burrows still thinks about Sarah Hanson—the woman he had a brief but memorable fling with three years ago. So he’s shocked when the pretty American woman shows up at his castle door pleading with him to not end his contract with his gardeners, who happen to be Sarah’s aunt and uncle. Sarah is desperate to complete the garden, but Gavin is desperate, too. He’ll do almost anything to get his mother to stop playing matchmaker—even if that means making a deal with Sarah to pose as his fiancée. She gets her garden, he gets his mother off his back. At least with Sarah posing as his fake fiancée, he can avoid all his mother’s marriage prospects. Coming from a large and rambunctious family, all he’s ever really wanted was to be alone to work on his inventions. He certainly won’t let one gorgeous gardener get in his way.

Sarah would never tell Gavin this, but that summer three years ago? She’d fallen hard for him. As an only child, Sarah has always wanted a large family, so when she learns he considers having a big, loud family akin to having the plague, she now realizes Gavin is definitely not the man for her. Still, she can’t resist the opportunity to restore Gavin’s historic garden to its former glory, so when he offers, she reluctantly agrees to pose as his fiancée and prays she can shield her heart. But even though she knows it’s temporary, she surrenders to their smoldering attraction and falls hard all over again. When Gavin’s parents throw them an engagement party, the guilt over all their lies begins to weigh heavy—as does the realization she’ll once again be left heartbroken.

As the garden she’s created turns out to be a spectacular achievement, Sarah can only wonder if her love for Gavin will wither or finally bloom into something just as grand…

The Tycoon’s Fake Fiancée is available on: