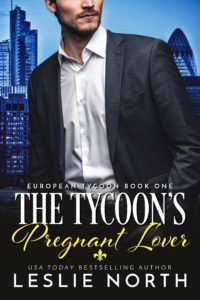 Romance novelist Brandy Jackson is not a one-night-stand kind of girl, but with Maximillian Benton, she’s willing to make an exception. Big mistake. Turns out, the charming, handsome man with a sexy British accent is a jerk who’s only interested in laying claim to Landon Castle, the inheritance Brandy received when her beloved grandmother died. But apparently through a cheating attorney, the castle was purchased at auction by Max. When a judge orders them to both live at the castle until the legal matter is resolved, Brandy reluctantly agrees. As big as the castle is, it turns out to be too small for her and Max, who find themselves spending more and more time together. And even though Brandy knows Max isn’t her happily-ever-after, when the heat becomes too much she still gives in to her passion. Bigger mistake. Now she’s pregnant.

Max’s motives for wanting the castle are simple: revenge. A billionaire software designer, Max was swindled by the man who owned the castle, and now it’s sweet payback owning the thing his nemesis loved most. So when his plans are sent awry by a pretty American, he has no choice but to dig in his heels and make sure the castle remains his. Max tries, rather desperately, to ignore his attraction to Brandy and the way his heart expands whenever they’re together. Despite his cynicism about love, he can’t help wondering if Brandy might be different from all the other women he’s met. But when he believes he’s been duped by her sweet smile and sexy body, Max all too readily decides ending what they have is for the best. Happily ever after just isn’t for him. But he can’t shake the feeling he may have lost the best thing in his life…

The Tycoon’s Pregnant Lover is available on:

Max Benton had come to the Grand Abby Hotel in York on business, not pleasure—but that didn’t mean temptation didn’t have a way of happening.

These days, it was almost always business with him. Either he was sprinting to finish coding a security program to faultlessness, or he was enjoying the company of a woman. Tonight, sitting at the hotel bar with his laptop open and an Old Fashioned on his right, he was just settling into the former when the latter walked through the door.

Don’t look, Max warned himself. Look up and it’s over for you. You may as well kiss your deadline goodbye.

He massaged his lower lip thoughtfully with one rough finger, then cursed. He didn’t need to be thinking in terms of kisses. He had seen an incredible pair of legs enter the bar out of the corner of his eye, and he’d immediately barred himself from looking beyond that. The telltale click of heels heralded the woman’s approach. She sat down several stools away and sighed wearily. He didn’t look up. When she placed her order with the bartender in a pleasant, throaty voice, he didn’t look up. But when, out of the corner of his eye, he noticed those long, lean legs cross themselves beneath the bar, and that black skirt rise up to expose several more inches of thigh…

He looked. He was helpless not to. He kept his glance brief, drinking in everything he could of his fellow bar patron before turning back to his screen. Suddenly, he became aware of his own heartbeat, his blood pumping in his ears. She was more than he might have expected even in his wildest (and crudest) imaginings—she was a stunner, a knockout, a raven-haired beauty with a body that would make a photographer for Playboy blush. She carried herself casually, as if she wasn’t at all aware of herself or the effect she would have on any watching hot-blooded male, and her unassuming demeanor only made that blood of his run hotter.

She jounced one ankle beneath the bar, cheek pillowed in one softly-closed palm, as she pored over a set of documents she had unearthed from her briefcase. She didn’t appear to notice him there, but appearances could be deceiving. She could be playing the same game he was, both players abiding by unspoken rules.

Max glared at his laptop.

He couldn’t go on like this, not with Venus herself sitting so close to him. A decision had to be made.

For perhaps the first time in his life, Max decided that work, revenge… it could all wait. He could afford one last diversion. He closed his laptop and turned his full attention to the gorgeous specimen sitting farther down the length of the bar. The brunette didn’t disappoint; she looked up at once, perhaps compelled by the forthrightness of his stare. A light pink dusted those impeccably high cheekbones of hers, and he hadn’t even said a word.

This was going to be too easy.

“You’re an American,” he said.

Brandy’s first instinct was toward self-consciousness. Obviously, this lone man sitting at the bar across from her was gorgeous. In fact, she had been surprised to find him alone. His sandy blond hair was swept faultlessly back from his angular face, and his eyes were such a vivid, gorgeous blue, their steady gaze stole the air from her lungs—and any memory of how to breathe along with it.

He had the face of a romance hero, one of the dashing men she wrote about in her books—something she had never expected to encounter in real life. She wondered idly if he was a movie star… one of those rarified beings who was, here and now, staring at her raptly and obviously awaiting her next move. It was a dance, she realized. The question was: did she want him to continue to take the lead?

The Tycoon’s Pregnant Lover is available on: