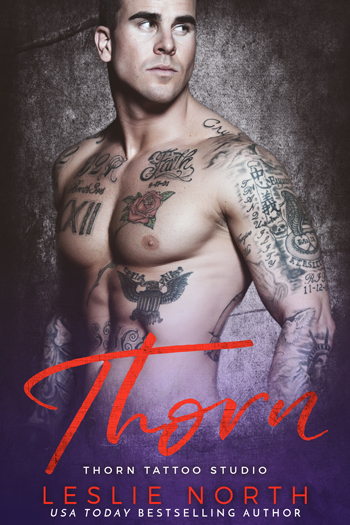 I’ve got to introduce you to a tall, tattooed and tormented Luciano DeRose.

He’s the head tattoo artist at the Thorn Tattoo studio,

a tall six-feet of hunky goodness,

with a beard, you wouldn’t mind sitting on ; )

If you like a tortured bad-boy, you’ll love Thorn! You can get your copy at:

Luciano DeRose is looking to get the hell out of town. He’s been absent from his position of Head Artist at Thorn Tattoo since the day he watched his future go up in flames. However, the bonds of family are strong and he’s dragged back into town as a favor to his younger brother. But Luciano isn’t staying for long and certainly not for the anniversary of the day his life went to hell.

Melanie Noel has spent most of her adult life fixing Luciano’s. She’s his virtual assistant, organizational guru, and problem-solver extraordinaire. However, this ex-hippie chick wants her boss, and secret crush, to see that he can finally move on. Melanie thinks that this anniversary is the perfect time for Luciano to face his grief, let go and finally be free to see what’s been waiting for him all along.

When Luciano decides to do everything in his power to leave, Melanie sees that she needs more than logic to make him stay. Risking her heart to save the man she’s loved from afar, Melanie gives into her desire for Luciano—sparked by a world-rocking kiss. The heat between them has the power to heal all wounds or it may set both their lives up in flames.

As she sat, Melanie looked Luciano over. Like most days, he wore a white V-neck T-shirt with an open button-down over it, rolled at the sleeves. His arms were covered in colorful tattoos, and the V-neck revealed that his chest was decorated with more of the same. No visible ink marred his neck, face, or hands. Even his wrists were left bare.

He was handsome. Melanie had worked closely with him for two years, and she hadn’t failed to notice how his toned biceps stretched his shirtsleeves, or how his firm chest filled out his shirts. He was a solid man with a straight figure, but she liked that about him. Solid meant safe. Solid meant strength. Not much more than a twig herself, Melanie liked to think they traded services; she made sure he stayed on task and made it to his appointments, and he served as her unofficial bodyguard.

Not a single creepy guy had approached her and made lewd comments since she’d found herself in Luciano’s company. No one wanted to mess with a burly, tattooed, bearded hulk of a man. Too bad the man was off limits to her. She enjoyed her job too much to make that mistake.

“Yep. I got you penciled in. Good thing you took it, because I had a few clients interested in that spot already. Now, it’s all yours.” Luciano jotted something else down in the appointment book, then closed the cover firmly and slid it away from him. He picked up his nitro-brewed coffee and sipped at it instead. “Okay. Cool. Sounds good. See you then.”

Luciano disconnected the call and placed it on the desk with a sigh. He took another long sip of coffee, swiveled his stool around so he faced Melanie, and looked her up and down as though he were expecting something.

Grab yourself a coffee, sit down somewhere comfy and get to know Luciano DeRose a little better. Thorn is available at: