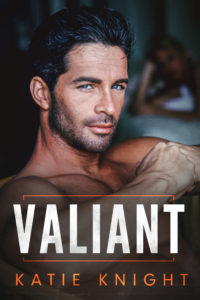 Never get between a SEAL and his family…

Navy SEAL Cole Williams thought he was fine with staying out of his son’s life. After all, that seemed to be what his ex wanted. But when it becomes clear that Kelsey and their baby are in danger, Cole doesn’t hesitate to charge back into their lives—at least for a little while. But as they spend time together, the gruff, battle-hardened SEAL begins to wonder if he should finally make the situation permanent….

Kelsey may have mixed emotions about Cole given their past, but there’s no denying she feels better now that he’s here to protect them. Her father has gone missing, and someone wants to use her and her son as bait to force his return. She knows Cole won’t allow them to be hurt…but the longer he stays with them, the more she fears for her heart.

With time slipping away and danger closing in, Kelsey realizes everything she holds dear is in peril—will they live long enough to listen to their hearts?

Grab your copy of Valiant from Amazon.