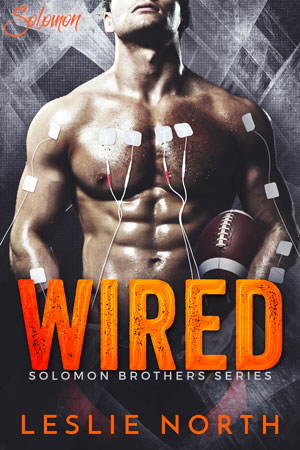 Star quarterback Marcus Kingston lives and breathes football. He’s trusted his abilities and instincts to get him this far, but an injury last season nearly ended his career. When his coaches want him to wear biofeedback technology to analyze his game, Marcus thinks the idea is ridiculous. Plus, the mousy scientist behind the project knows nothing about sports, and she quickly gets under his skin. But with another QB waiting on the sidelines, Marcus can either agree to participate, or be benched—permanently.

Scientist Clare Wynifred values intellect above most things. With her brain constantly working, she has little interest in her appearance and zero interest in sports. She never imagined her wearable tech being used to improve someone’s game, but its success with the team could get her a military contract. Clare may be too late to save her brother, but her technology could save the lives of countless soldiers. She just has to make it work with the stubborn quarterback, and she’ll be one step closer to her goal.

Marcus and Clare butt heads at first, but their mutual attraction quickly grows. And yet, with everything to lose, it’s easy to ignore that together they might be able to go the distance.

Get stubborn quarterback Marcus Kingston and sexy scientist Clare Wynifred on your eReader today, available on ALL major stores:

Marcus Kingston, so poised on the field, so calm during media interviews, left the conference room and promptly lost his shit. In the darkened hallway, Claire felt like an intruder in the private depths of someone’s psyche. She had followed him to bridge the gap, to explain that they were on the same side of this technology, that the software would do amazing things if he would allow it, that together they could make it perfect, but she stalled in this isolated space, unable to pull her eyes away from the mesmerizing display of testosterone and raw physical release.
Claire froze, unsure of her next move.
He paced the hallway, intermittently bracing and pushing against the walls like an old-school pong game. His chest rose and fell in exaggerated exhales, the only noise to fill the space until Claire’s ringtone bleated from her pocket.
Crap.
Marcus snapped his attention her direction. His expression fell into shadow, but she’d watched him enough on the two-story-tall media screen after a bad play to know that his mouth pinched in sharp angles and his eyes frosted over when plays backfired.
She pressed the mute button on her cell, plunging them once again into quiet.
“I didn’t mean to intrude.”
“Am I going to get a read out on that tomorrow? Blood pressure spike?”
“Had you been wired, you might have broken the algorithm.”
Her joke stalled faster than her ability to relate to someone who didn’t reside in the cerebral. Square one. Start at square one.
“We haven’t been introduced. I’m Claire.”
“Wynifred. Nothing wrong with my hearing.”
Nothing wrong with much else, either. Stripped of pads, his muscles were curved, stacked, taut. She didn’t appreciate much about the game—didn’t understand the intelligence coma American audiences entered each Sunday, gathered around their televisions, investing their emotions in an allegiance that mattered little in the bigger picture of life. But no one could deny that an elite athlete in second-skin pants spoke to the baser pleasures of the hypothalamus.
Marcus Kingston was no exception—mixed race, hair shaved close, eyes a watery blue, everything white on him brilliant against the warm tone of his skin. Not that she would be on the receiving end of that smile. Ever, she guessed.
“You should get some fluids. Dehydration can have a profound impact on cognition and anxiety levels.”
He shook his head and gave a caustic laugh.
“What else you know about me?”
She didn’t have her results in front of her, but she had earned a doctorate in record time thanks to an eidetic memory. Everything she needed was always in her brain.
“I know you audibled eleven times, eight of which resulted in a loss of five yards or more. I know the optimum angle of your throwing arm averages forty-two degrees based on distance and accuracy results. Your default scan of the field is close right, far left, then far right, leaving a blind spot close left. And you grind you back molars when you’re assessing the opposing team’s line up on defense.”
“Mouth guard?”
“Jumbotron.”
Marcus nodded, as if allowing the impressive array of statistics to sink in. He scooped up his pads and cleats and helmet.
“And my hometown? The neighborhood where I grew up?”
The question threw her. Not once had she come across that information.
“I don’t know.”
“How about the age when I got my first beating? Or how much government assistance my dad believed he missed out on from my mother before he turned me out on the streets? Or the age I finally learned to read?”
Claire’s chest burned in a slow ache. Suddenly her stats didn’t seem so impressive.
“See, not everything I leave out on that field can be measured in heart rates or blood pressure or the goddamned oxygen level in my blood. You cannot quantify drive. You cannot know that I change plays at the line of scrimmage so that Rungnir, who has blindness in his left peripheral vision, doesn’t get creamed, or so that Garrick might be considered for the Pro Bowl this year because his father has never once said he was proud of him. Nothing you do will ever inform the choices I make out on that field.”
“Maybe not. But you’re standing in my way just as much as I’m standing in yours. We work toward the same goal, we both get what we want.”
“And what is it you want, Miss Wynifred? A fat bank account? A title at some Ivy League school? People to notice you for something other than your ugly green skirt?”
Had she been wired, body temperature tracked at her forehead would have spiked, her palms would have registered perspiration, and sensors might have picked up increased activity in her occipital lobe, where she imagined herself giving the walking ego of the Portland Rogues a swift kick between the goal posts.
Also, her skirt was red.
“You were right about one thing. I know zip—less than zip—about this game. But you, King? You know even less about people.” Claire reversed course down the long hallway, mindful that he watched every nuance of her retreat. “Training facility, tomorrow. Eight a.m. sharp.”
“Tomorrow’s my day off.”
“Take Monday off, and you can count on a day off Sunday, too.”
Five steps. Six. Seven. Damn, she didn’t remember the hallway being this long.
“Nice to meet you, ClaireBear.”
Without breaking stride, Claire fired back, “Call me that again and all the other insignificant data I lifted from the sensors in your pants become common knowledge.”
Claire rounded the corner to the elevators, broke into a smile, and hi-fived the troll-like Rogue mascot painted on the wall.

Get stubborn quarterback Marcus Kingston and sexy scientist Clare Wynifred on your eReader today, available on ALL major stores: