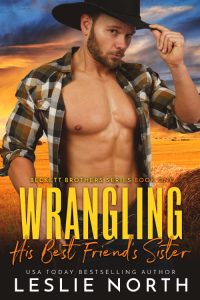 He owes his best friend a favor.

Neither expected to end up in bed together…

Reluctantly returning to her hometown, single mom Ava Pearson just wants a job to get her back on her feet and escape again. But when she asked her brother for help, the last place she thought she’d end up was in the office of his jaw-droppingly-hot best friend.

Branson Beckett needs help, but if comes in the form of firecracker Ava, he’ll have to pass—he doesn’t need that kind of distraction, especially now. He’s the owner of a ranch on the brink of expansion and is looking for a few good ranch hands to help him out. However, he wasn’t thinking of his best friend’s little sister when it came to hard labor. No, he’d thought of her in other hard situations, but they usually involved his great big bed. Dreams that had no place in reality.

But her brother calls in a favour and he can’t not help a single mom out—his own mom raised him better than that. Plus Branson does need her help interviewing his ranch hands. It’s a win-win. He’ll fix his personnel problem, and she’ll get the cash she needs to move back out. Definitely no romance.

Yet as personnel issues lead to personal pleasure between them, Ava’s big city dreams begin to drift away, replaced by visions of a family in the country with a hunky cowboy. Branson loves having Ava and her son on the ranch, but can he finally see her as the woman of his dreams, instead of off-limits?

PS: The Beckett Brothers is now available as a boxed set from Amazon, GooglePlay, iBooks, Nook and Kobo.