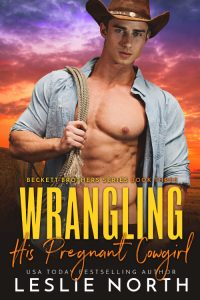 Scout Beckett has always wanted to run a ranch, not just work it under the purview of his older sibling. He wants to do something different from his family’s horses and beef cattle: he wants to own a dairy farm. To this end, Scout has been working on one as a foreman, and his mentor had always promised it would be Scout’s after he passed. But when the owner dies, he wills it to his city-slicker granddaughter instead; leaving Scout in charge of a farm that will never be his.

Stella has worked for a nonprofit for years, helping to feed starving children in third-world countries. When she comes home for the funeral to say goodbye to her grandfather, the only stability she’s ever known, she finds herself falling into the arms of sexy cowboy Scout when shared loss and simple comfort turns to a night of passion before they each go their separate ways.

But three months later, Stella returns to the ranch, faced with the stipulations of her grandfather’s will: she must stay for the better part of the year, or lose the ranch to charity. Not only that, but she has to tell her one-night stand that he’s going to be a daddy. When the shock of her pregnancy wears off, Stella vows to ride out the will’s rule and get back to her old life as soon as possible.

But as Stella slowly remembers why she’s always loved the place she’s come back to, Scout has to decide if he’s okay with never owning the land he works. Is having a family enough? Or will he pass on love and passion for a farm of his own?

PS: The Beckett Brothers is now available as a boxed set from Amazon, GooglePlay, iBooks, Nook and Kobo.