Pregnant by the Billionaire (Billionaires & Babies #3) 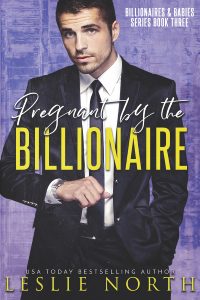 Donovan Fitz lives by the saying: Go big or go home. And what could be bigger, and draw more attention to him and his mega-billion-dollar video game business, than creating a reality TV show about his quest for a wife? He’ll just have to deal with the distraction of his sexy producer, Melissa Hampton, and try to forget the amazing night they spent together. It’s all about the show, the attention, the ego-building blaze of publicity…until he finds out Melissa’s pregnant with his baby. Now all Donovan wants is her. But the plot twist of becoming a father while still looking for a wife is ratings gold and could be the big-break Melissa deserves. If only he can convince the camera-shy Melissa that putting their story out there would be good for both of them.

Melissa is terrified—and excited—at the prospect of becoming a mother. And if she’s honest, Donovan’s excitement about becoming a father is sweet. What’s not sweet at all is the pressure to use her pregnancy as a dramatic twist in their reality show. She craves a quiet life at the edges of show business and doesn’t want anything to do with the spotlight. In the end, though, Melissa knows she can’t hide completely if their show is going to bring in the ratings. Too bad that means she can’t trust a thing Donovan says to her while the cameras are rolling.

The reality is, though, she’s fallen in love with him, despite her determination not to. And now Donovan must figure out which will crush her less: killing her career-making show or letting her ignore just how right they are for each other.

Pick up this steamy romance from: