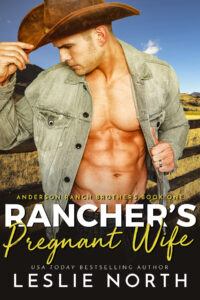 True love is worth fighting for…

Rancher Silas Anderson was raised to believe in one thing: hard work leads to success. Maybe that’s why he throws himself into his work a little too much. Come hell or high water, he’s going to make his ranch the best it can be. No matter the cost…

But his wife Bea has dreams of her own—a life she’s had to put on hold, while Silas focused all his attention on the ranch. And as far as she’s concerned, he’s never going to give her the love and care she deserves. When she discovers she’s pregnant, she decides it’s time for change.

Bea is ready to leave Silas for good, and begin her career as a seamstress to support herself and the baby on the way. But when Silas realizes he’s about to lose the love of his life, he’s determined to fix his mistakes and win her back. Starting with a breath-taking kiss that leaves Bea weak in the knees. And as she stitches away at a client’s bridal gown, she begins to wonder… Does Silas deserve a second chance?

But when things start to fall apart at the seams, Bea is forced to make a choice. If she wants to start a new life, will she have to leave the old one behind?