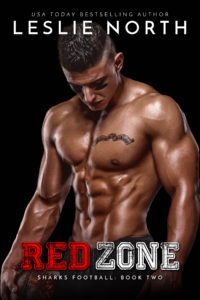 James Sullivan, quarterback for the Savannah Sharks, never thought there’d come a day when football wasn’t his priority. But finally finding his feet after his divorce and with a nine-year-old daughter to raise by himself, he has new priorities. And it shows on the field.

Newly hired conditioning coach Daisy Katrakis has pointed out his less-than-stellar play, and that rankles James. He’s known Daisy for years—she’s his best friend’s little sister—and more annoying than her criticism is how attractive she is. When did Daisy get so hot? Though he reminds himself that she’s his coach, it’s hard to ignore their mutual attraction. And harder still to ignore what Daisy is starting to do to his heart.

Being hired by the Sharks is a dream come true for Daisy. The last thing she needs is to complicate things by getting into a relationship with the terminally sexy James Sullivan. Her obsession is football, not a gorgeous quarterback with muscles that have muscles.

Daisy’s never been a girly-girl, but there’s something about James that brings out her softer side. Something that makes her think there could be more. But a coach dating the quarterback is fraught with complications, and Daisy knows her priority has to be her job. Which leaves her with an impossible decision: live her dream or break her own heart.

Red Zone is available from: