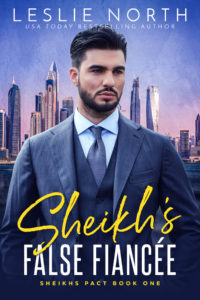 When it comes to royal affairs, deception always leads to temptation…

When a rival prince tries to force travel vlogger Nadia into marriage, the handsome and gallant Sheikh Amare Nazar is compelled to intervene. It’s clear this beautiful American is in way over her head. If they can just pretend they’re engaged, Amare can protect her and avoid angering his powerful rival. But there’s no avoiding the attraction he feels towards Nadia.

Nadia is a bit freaked out by the fake engagement, but she trusts Amare, and knows he would never force her to do anything she didn’t want to. And it doesn’t hurt that he’s the sexiest man she’s ever laid eyes on. She’ll be his fiancée for as long as it takes—and it gives her time to write her travel book. With Amare as her personal tour guide, their relationship quickly becomes more personal than either planned.

But when a mistake from her past threatens the bond between them, Nadia is left wondering… Is their attraction real? Or is it all just another deception…

Grab your copy of Sheikh’s False Fiancée from: