Snowed in with the Rancher 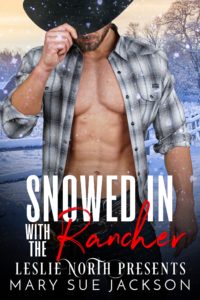 Olivia Wickham could never forget the cowboy she met on a cruise five years ago. The two spent a magical few days together before she was called home for an emergency, without giving him her number. She would have gotten over Tate McConnell—it was just a few nights of paradise, after all—if it wasn’t for two little things: her twin daughters, who were born as a result of those wonderful days. Though she searched for her lost romance in vain, she never forgot his mesmerizing eyes, and the way his smile made her melt inside.

On a trip to the wilderness just before Christmas, things take a scary turn when one of her daughters is injured on a snowshoeing tour and the little family is unknowingly left behind by the guide. When Tate shows up to save them, she instantly knows who he is—the father of her children, and possibly the love of her life.

Surprised is a mild term for what Tate feels when he realizes the woman he’s been sent to rescue is Olivia. He’d searched for her over the years, her smile and laugh invading his thoughts on lonely nights. When he learns the two little girls with Olivia are his, surprise makes way for shock. Now, with a major snowstorm coming their way, Tate has to quickly get them to safety inside a cozy little cabin in the woods. Too cozy, since Tate is adjusting to being a father and trying to fight his fierce attraction to Olivia. But since they’re snowbound, there’s nothing to be done but to let his feelings thaw a bit. Or a lot, since they can’t seem to keep their hands off each other every chance they have to be alone. When reality intrudes, though, real panic sets in for Tate. He’s been alone too long to suddenly be a big family man, even if it is Christmas time.

But when Tate finds himself alone on Christmas Day, he realizes being alone is, well, lonely. He can only hope he’s not too late to create his own Christmas magic.