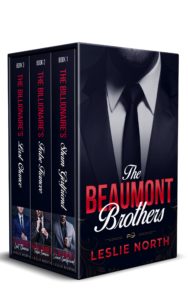 These billionaire brothers have spent their lives enjoying the opulence and luxury that their family name affords — but that’s about to change — the powerful trio will be forced to turn their playboy lifestyles around and settle down or risk losing everything.

How will they do it?

Gregor Beaumont… All he has to do is find some wholesome and desperate girl to be his fake girlfriend. Easy, right? No harm. No foul.

Alistair Beaumont… This lifelong bachelor doesn’t believe in true love or marriage. Well, that’s what he thought he thought… now he isn’t so sure. After a skiing accident, Alister woke up with amnesia and a gorgeous fiancée.

Connall Beaumont… This lone wolf will do anything to get what he wants, even if that means charming a stunningly beautiful woman.

Pick up the ENTIRE The Beaumont Brothers series from:

Book One: The Billionaire’s Sham Girlfriend
Gregor Beaumont is in a world of hurt that all the charm in his gorgeous, well-toned body can’t fix. His late grandfather, God rest his soul, wanted to make sure Gregor and his two playboy brothers settle down. He had the brilliant idea of buying up a huge share of the brothers’ engine company and using that as incentive for each brother to find Mrs. Right. Settle down or lose the company to a competitor. Well, that’s just not happening to Gregor, not when life’s so good at the moment. Gregor likes racing fast cars and seducing fast women, and not necessarily in that order. Settle down? Not a chance. Gregor has his own brilliant idea: find some wholesome and desperate girl to pretend to be his girlfriend. No harm. No foul. Unless things start getting a little bit too real.

Kara Alerby knows she’s a sucker for blues eyes and a great smile, so when Gregor comes into her theater wanting to hire her to act the part of his adoring girlfriend, she’s already got her defenses on high alert. But Kara’s a practical girl, and Gregor’s offering a boatload of money that would go a long way toward making her dream a reality. All she has to do is remind herself, every second of every day they’re together, that it’s all make believe—even when it doesn’t always feel that way.

Book Two: The Billionaire’s False Fiancée
Jess Green has had to fight for everything she has. When she sees her future about to slide into an abyss thanks to an offhand comment made by her sexy but oblivious boss, Alistair Beaumont, she decides to take things into her own hands. Everyone in the financial world knows the Beaumont brothers need to settle down else the company that Jess depends upon will go under. So when Alistair is overheard discussing his disbelief in love and marriage the company stock price plunges. When Alistair suffers a bout of amnesia on a skiing trip, Jess sees a way to save the company and decides to tell him one teeny, tiny lie: she’s his fiancé.

Alistair loves one thing and one thing only—his freedom—and certainly not the girl he finds in his bed, claiming to be his future wife. Amnesia or not, something’s not right. Sure, she’s got that girl-next-door sexiness about her, and his attraction to her is powerful, but deep in his gut he’s rebelling against the idea of being tied down. Snowed in and isolated from the world in an exclusive lodge, Alistair begins to believe they are a couple and he actually finds himself falling in love.

Conall Beaumont, CEO and COO of B3 Motors, was just about to propose to the woman of his dreams when it all went south. Turns out, the lady had a habit of killing her husbands, so Conall will have to look elsewhere if he wants to find a wife. It just so happens that the stunningly beautiful woman who witnessed his humiliation is the daughter of the lawyer who’s executing his grandfather’s will—a will Conall would do just about anything to get his hands on in order to save his company and the livelihoods of the people who work for him. If putting his hands on a beautiful woman will get him closer to that goal, then he’s game. Besides, there’s something about Bernadette Rowland that has him thinking she could be more than just a pawn in his grandfather’s game.

Bernadette wasn’t looking for a man, but when Conall inserted himself into her life, she didn’t put up much of a struggle. He’s sexy and smart and seems genuinely interested in her work as a wolf researcher. Bernadette can’t resist his charm and before long, she’s swept up into his world. But just when she thinks she’s found someone who could be her mate for life, she discovers the real reason he’s been piling on the charm, and their perfect romance crumbles.

Pick up the ENTIRE The Beaumont Brothers series from: