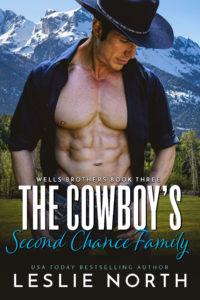 Avery Collins never forgot the pain of her broken heart when Tucker Wells, love of her life and father of her daughter, walked out on their relationship. Now, ten years later, she’s shocked when he stumbles through her door in the middle of a snowstorm. And even stranger, he claims to have no memory of leaving her…

Avery’s not buying his crazy amnesia story. But she has to admit, he’s acting like a kinder, gentler, and sexier version of the boy she once loved. As Shanna’s father, Tucker is definitely back in Avery’s life. But can she ever let him back into her heart?

After years traveling the world as a photographer, Tucker is determined to do whatever he can to make up for lost time. His mind may be a bit muddled after a bad fall from his horse, but he knows two things for sure. He wants to get to know the daughter he never knew he had. And he’s still in love with Avery.

If only he could remember what made him leave all those years ago, maybe he could find his way back to her now…

The Cowboy’s Second Chance Family is now available on: