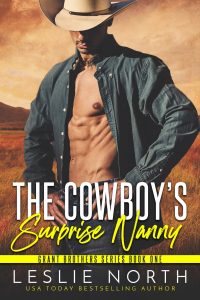 Ian Grant isn’t a man who accepts help easily. After promising his young son that he could participate in the strawberry festival, and then missing the admittance deadline, Ian’s in a bind and forced to ask the mayor for a favor. The mayor agrees, on one condition: his niece has run into hard times and needs a safe place to stay: Ian’s place to stay. She’s great with kids and Ian needs someone to look after his rambunctious son Andy while he ranches. Ian agrees, expecting some college-aged girl who’d flunked Algebra. Instead, he finds a full-grown woman—a beautiful and sassy one to boot.

Katie Rylie has always dreamed of helping others by teaching them to cook. Her online persona was thriving—until a scandal with her forthcoming cookbook rocked her career. Not only did she have to pay back the entire advance, but her once-loyal fan base has turned against her. Defeated and with nowhere to go, Katie feels it’s better to hide out in the country until she can get her life back together. The offer of a free home, an open range, and a wily six-year-old to focus on sounds like just the escape she needs.

When Andy’s diet restrictions force Katie to become creative in the kitchen, she finds herself drawn back into the food world, just as she’s falling in love with Ian and Andy. But Ian, who likes having control of everything, doesn’t know how to ask Katie to become a permanent part of their lives.

If their love is ever going to work, Ian and Katie will need to learn that having it all doesn’t mean giving anything up.