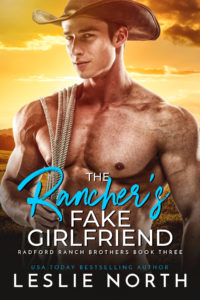 No one has ever taken Chad Radford seriously—not even himself. But when folks in town think his running for board of the cattleman’s union is nothing more than a joke, he realizes it’s time for a change. When the opportunity comes for him to be the hero to new-in-town single mom, Hannah Smith, who’s being harassed by a persistent ex, he takes it as a chance to prove to the locals and his family that he can be responsible and trusted. To keep the creep away, Chad agrees to be Hannah’s fake boyfriend, and even he’s surprised how quickly people’s opinions of him change. This boyfriend stuff is pretty useful. Not to mention kind of nice.

All Hannah wants for her and her daughter is a quiet place to live, far away from the complete mess of her past. Trading in her high-powered career as a communications director for a job as a waitress is perfect. Everything is simple and straightforward until a sexy cowboy comes into her life. Being in a fake relationship with Chad is far more difficult than she’d thought it would be—especially when it starts feeling all too real. When her past starts to threaten her present, though, Hannah is faced with the most difficult decision of her life, one that could break the tenuous trust of a man she’s falling in love with…

The Rancher’s Fake Girlfriend is available from: