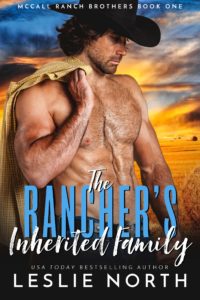 Trevor McCall doesn’t want to be a rancher, or settle down and become a family man. Now, however, he’s forced to not only take over his late parents’ ranch, but also unexpectedly raise his cousin’s four-year-old daughter, Jade.

Sure, he can run the place for the year-long stipulation specified in his parents’ will, but take care of a kid? No way. Nothing in his life has prepared him to be the father of a four-year-old girl. Complicating matters, Lacey Cameron, his sweet and pretty housekeeper, is leaving to open up her own B&B. Lacey has always lived at the McCall ranch—she can’t leave now when he needs her most. Desperate, Trevor makes a deal with her: Stay and help him with little Jade and in return he’ll help her fix up the B&B. Lacey agrees, and as the two of them work together, Trevor quickly realizes the girl he’s known all his life has grown into a beautiful woman, one who, to his shock, manages to find a crack in his hardened heart.

Lacey’s spent her entire life at the McCall ranch. Generations of Camerons have worked there, but she’s finally breaking free. For years she’s been saving for a B&B, and nothing’s going to stop her from finally realizing her dream and leaving the McCalls. Not that she doesn’t love them all. It’s that she loves one McCall a bit too much, even though she’d die before letting Trevor know how she feels. With this particular cowboy, love was never in the picture. But after the contractor for her B&B scams her, she can’t refuse Trevor’s offer to help. She can ignore the painful wrenching in her heart every time she hears his voice if it will get her business up and running. Then the completely unexpected happens: She realizes Trevor is just as attracted to her as she is to him.

But Trevor plans to leave as soon as his obligation to honor his parents’ last wishes is over. Even so, Lacey gives in to their attraction, knowing she’s just setting herself up for heartache. After all, better to have a broken heart than a lonely one…right?