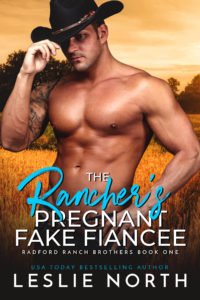 They were just friends. Until one night changed everything…

Rancher Jett Radford has had a crush on Noelle for years, but he always kept her strictly off limits. He would never date his best friend’s little sister. But after his father’s death turns his world upside down, the gruff cowboy turns to Noelle for comfort. And their one night of passion has consequences they can’t walk away from—because now Noelle is pregnant, and she needs a favor.

With a high-profile wedding cake commission in the works, baker Noelle will lose the contract if she’s seen as less than respectable. So she wants Jett to agree to a fake engagement, just until she can deliver her masterpiece. Jett agrees, figuring he can keep his emotions in check. Turns out, though, he doesn’t know his own heart as well as he thought…

Being a fake fiancée is tough on Noelle as well. And she quickly discovers their hot kisses and untamed attraction feel all too real. But how can she trust her feelings, when she doesn’t know what’s part of the act?

Can these two discover their true feelings for one another, before it’s too late?

The Rancher’s Pregnant Fake Fiancée is available from: