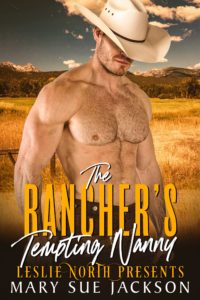 Rancher Austin Flint has never been afraid to get his hands dirty. Renovating the ranch he lives on is a project he’s always dreamed of. So when his ex abandons their two-year-old daughter, Lea, for him to raise alone, Austin soon realizes that no amount of hard work will allow him to fix up his home and take care of his little girl: especially one who hasn’t spoken since her mother left.

As Austin struggles to come to terms with the realities of single parenthood, his reluctance to accept help waivers. And when his sister recommends he hire her speech pathologist friend, Sara Kilne, for the summer as a nanny, Austin feels like he has no choice but to let her into his life.

When he sees Sara for the first time, he immediately regrets offering her the job. For one thing, she’s breathtaking. But she also looks exactly like he suspected – a pampered city girl. The last thing he needs is some slick professional telling him how to look after Lea or even worse, distracting his heart…

As for Sara, this job couldn’t have come at a better time. Having found the strength to leave her domineering husband and demanding work at an elementary school, she’s finally ready to face the crossroads in her life head on; even if that means falling hard for the tough-as-nails cowboy.

Just as Austin and Sara begin to ease into a sweet and trusting relationship, Austin’s estranged father shows up and everything changes. Sara doesn’t trust his motives one bit and things between her and Austin grow decidedly chilly.

With the prospect of a new job luring her away and life at the ranch seeming less permanent by the day, Sara is forced to make a heartbreaking choice. If only Austin could find the courage to give into the love that’s been missing all his life…

The Rancher’s Tempting Nanny is available on: