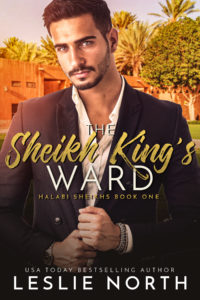 When King Bashar Halabi finds out he’s guardian to a recently orphaned girl, he welcomes her into his palace. But he’s stunned when the “girl” turns out to be a twenty-seven-year-old American beauty, Fiona Nadide.

According to a secret stipulation in her father’s will, Fiona will not obtain her inheritance and be free from guardianship unless she marries before her 28th birthday. But to Fiona, arranged marriages are archaic. She has absolutely no intention of getting married, and certainly not to a man handpicked by Bashar. The truth is, the only man she’s interested in is her smouldering guardian.

As his ward, Fiona is strictly off limits to Bashar, and his advisors would be shocked if they knew where his thoughts about Fiona were drifting. Problem is, Bas can’t stop wishing he could have her for himself.

The Sheikh King’s Ward is available from: