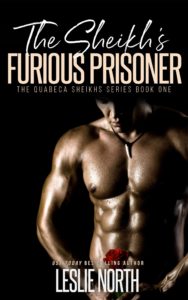 Saja is summoned back home to the province of Quabeca, and is to be forced into a marriage with Prince Basil Al-Qadir.

But Saja is not interested in marriage, even if her betrothed is extremely attractive and wealthy. The Prince has the jawline of a Greek god, is strikingly tall and his muscular figure would intimidate most, but not Saja. After meeting the man for only two minutes she already hates him. He is controlling, argumentative and insufferably arrogant, yet, his dark broody eyes hold an intensity that Saja struggles to pull back from.

Prince Al-Qadir has never met a woman like Saja; she is almost from a different species. She wears improper clothing, behaves inappropriately, and has no traditional values. And she does not fear him. In fact, her temper often flares around him. She needs taming, yet he can’t help but notice the feeling that surfaces in his groin when she is around, and the loneliness he feels when she isn’t.

Until he has tamed her, he refuses to let her go. But this may be a game he loses, and the Prince never loses.