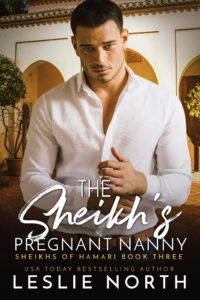 To Matek, a fierce and hardened warrior, love is a weakness. Since childhood, he’s been trained to be tough, fearless, and calculating. His life as a security specialist has no room for softness, and his heart certainly has no room for the sexy Nina Frank, his cousin’s nanny. But when she tells him she’s pregnant with his baby, his protective instincts go into overdrive, and his whole being suddenly feels soft and exposed. He doesn’t like all this feeling stuff, but for some reason, his heart won’t listen to reason.

For Nina, finding herself pregnant was shocking enough. But discovering Matek is a prince is even worse. She thought he was just a security specialist and a distant cousin of her employer. Now, however, everyone is welcoming her into the royal family. There’s just one problem—Nina doesn’t want to be part of the royals. To her, their lives are suffocating and Matek’s obsession with security makes her feel like a prisoner. She longs for a normal, happy life with a man who adores her, and will give her the chance to create her own little family. Matek promises to be none of those things. Worse, Nina realizes she loves him. But she can’t help but wonder if he’ll ever allow his heart to see what he’s secretly been longing for all along…

The Sheikh’s Pregnant Nanny is available on:

Sheikhs of Hamari are also available as a boxset from Amazon, GooglePlay, iBooks, Nook and Kobo.