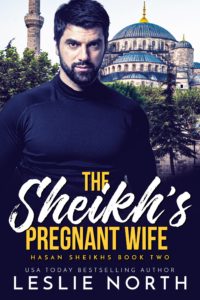 Love was definitely not in the air the day Yaseen Hasan, Prince of Raihan, and American Kara Shaw got married. One night of passion led to a pregnancy, and under Raihani law, Yaseen had to marry Kara. After the pregnancy debacle, Yaseen needs to prove to his family that he can be responsible, and he’s convinced he can keep things on a business level with Kara, even though his attraction to her is nearly combustible. His one consolation is that the two of them will divorce after their child is born. Easy. Clean. This marriage of convenience is the perfect solution for both of them. Yaseen can continue with his numerous business ventures, and Kara can continue working for the underprivileged. But though they may have started out as virtual strangers, as Yaseen gets to know Kara and sees her dedication to her cause, things get a bit complicated. It seems saying good-bye to his beautiful wife won’t be as easy as he’d initially thought.

Kara doesn’t know what to make of her new husband. On the outside, Yaseen’s all business. Cold facts, numbers, and balance sheets seem to be his only interests. Yet underneath, Kara begins to see a softer side, a side that makes her wonder if there is more to him. And though she’d initially agreed that their marriage would be nothing more than a business transaction, it’s not long before Kara is yearning for something more, something…permanent. All her life, she’s secretly longed for that proverbial white knight to sweep her away. Just when she thinks Yaseen is that man, she gets hit with harsh reality. Maybe Yaseen isn’t that knight, or maybe Kara will discover a sexy sheikh is even better.

The Sheikh’s Pregnant Wife is available on:

The Hasan Sheikhs series is also available as a boxed set on Amazon, GooglePlay, iBooks, Nook and Kobo.