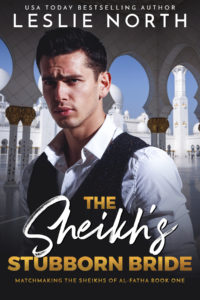 This royal romance is off to a rocky start…

As a way of apologizing to his matchmaking sister for inadvertently ending her engagement, Sheikh Kadir Oman agrees to let her find him a wife. He needs someone who is unquestionably supportive, especially since he’ll soon be taking over as king of Al-Fatha.

His sister thinks headstrong American Stella Green would be perfect for him. She’s smart, beautiful, and seems to love Al-Fatha as much as he does. And the chemistry between them is obvious. But he quickly discovers that Stella’s vision of the country is far different from his—and she’s just as stubborn as he is. Can he stay with a woman who disagrees with him about his country’s path, no matter how strong his feelings for her?

Stella still can’t believe she agreed to marry a man she’d never met—and a king at that! But something in her gut tells her this was the right decision—and not just because her new husband is gorgeous. Their marriage gets off to a rocky start, though, when Stella realizes Kadir’s idea of ruling Al-Fatha is to remove everything that’s beautiful about it.

Was their marriage a mistake? Or will they be able to work through their differences and make their love last forever?

The Sheikh’s Stubborn Bride is available from: