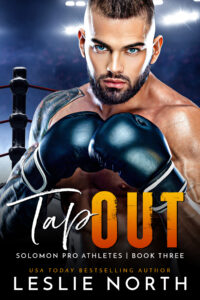 MMA fighter Henry Lorenz relies on discipline and strength to get through life. After inheriting his former mentor’s boxing gym, Henry has his hands full running a business and training a troubled teen who reminds him of himself at that age. Then a stubborn and distractingly beautiful social worker walks through the gym doors, turning Henry’s life upside down. Now, he’s determined to prove to her that there’s more to fighting than knowing how to throw a punch.

Maggie Kavanaugh is devoted to protecting kids from the violence of the streets. She wants them to use their brains, not their fists, to get ahead in life. When one of her most talented teens begins training at Henry’s gym, Maggie is worried. She’ll let the training continue, but she’s going to be watching every step of the way. And that means watching the gruff but smoking hot Henry as well…

When a dark moment from Henry’s past threatens to come between them, he’s torn. Should he keep his secret bottled up inside? Or can he give love a fighting chance?

Top-Scoring Player is available from: