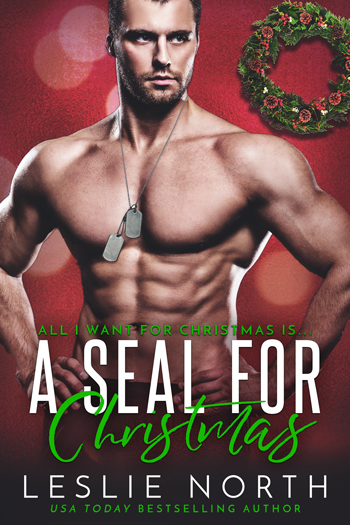 It’s Christmas in New York, and the lone wolf is about to go AWOL for love…

Navy SEAL Murphy Coen should be celebrating the upcoming holidays with friends and family, but with his sister Aileen missing, there’s not much for Murph to feel thankful for. To find Aileen, he’s fully prepared to use force, until an unexpected encounter has him rethinking his tactics. Shayma, his friend Daveed’s former fiancée, is sexy as hell, and something about her soothes his wayward soul. The brunette bombshell claims she can help, but Murph’s never been known for his patience. The clock is ticking, and he isn’t sure Shayma won’t get in the way of doing what he needs to do.

After ending her engagement to the man chosen by her father, Shayma bint Amr Kahlan has been enjoying the sights of New York City…and her ex’s best friend Murphy. The menacing military man has the dark, brooding thing down, but Shayma is certain his temper will lead to trouble—trouble his friends don’t want him in. When Daveed offers to promote her father if she can keep Murph in check while he and Heath secretly search for Aileen, Shayma sees a chance to help…and get back in her father’s good graces. She’s happy to prevent Murphy from getting out of hand. Besides, sometimes it takes a softer touch to get what you want.

Shayma and Murphy’s chemistry may be undeniable, but as the stakes get higher, can Murphy open himself up to love? Or will he be forced to choose between Shayma and finding his sister?

Learn more about this hot-tempered SEAL in your copy of A SEAL for Christmas today. It’s available at:

Murphy Coen, Navy SEAL and her ex-fiancé’s good friend, strode toward them with the restrained, lethal grace of a trained killer. Hot anger sparked in his coal black eyes and for a moment, Shayma found herself hypnotized by him—all long legs and lean muscle wrapped in a solid package of sex on a stick. His faded tight jeans and black leather motorcycle jacket gave him a thug look that sent an illicit thrill straight to her girly parts. She’d always been a sucker for a bad boy. Maybe because she’d always tried to be such a good girl herself.

No, no, no. This was not happening.

If anyone was off-limits for her, it was Murphy Coen. He was too slick, too masculine, too close to the mess she’d just gotten herself out of. Besides, if she didn’t do something quickly, he’d be too incarcerated to date anyone other than the guy in the next cell block, if his steel-edged stare at the chivalrous stranger was any indication. She’d seen friendlier looks from the Egyptian protestors toward the Mubarak soldiers back at the Cairo protests in 2011.

In direct opposition to the cold war happening before her eyes, heat and the luscious smells of roasting fresh seafood drifted out from the still-open door of Nerai. Shayma quickly looked inside and the hostess gave her a peeved stare.

Behind her, Murphy was close enough now that she heard the steady pound of his heavy, black boots against the snow-slick pavement, and the suited man finally let go of the door. Fury pulsed off of him in waves and he appeared ready to burst, a vein in his flushed forehead thumping visibly beneath his mottled skin. If she didn’t act fast, an actual homicide might take place right there on the threshold of the bistro. Which wouldn’t do at all, especially since she’d just bought the pretty cashmere coat she was wearing. Blood tended to stain rather badly.

Another unfortunate lesson she’d learned that forbidden summer in Cairo.

Acting on pure instinct, Shayma waited until Murphy was close enough for the fog of his breath on the frosty air to tickle the back of her neck, then she turned suddenly. Bag and packages went flying everywhere and from the periphery of her vision she saw the suited stranger bolt across the street, dodging cars and honking horns as he went. The man ran straight for a black limousine parked at the opposite curb and clambered into the back seat before the car pulled away in a hurry.

“Well, shit,” Murphy muttered, running a bare hand through his windblown black hair. Given his coloring, she would’ve placed his origins in the Middle East, same as her. But Melody had mentioned that Murphy was, in fact, Irish of all things. He certainly had the temper for it, that much was certain. Still cursing under his breath, he crouched in front of her to gather up her scattered belongings, soft faded denim stretching tight over his hard, muscled thighs and perfectly formed butt. Not that Shayma had noticed. Nope. Not at all.

Learn more about this hot-tempered SEAL in your copy of A SEAL for Christmas today. It’s available at: