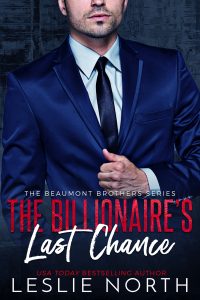 Connall Connall Beaumont, CEO and COO of B3 Motors, needs a wife in less than two months or he will lose the business he and his brothers have spent years building. Connall never expected that the stunningly beautiful woman he met at a bar is the daughter of the lawyer who’s executing his grandfather’s will—a will Connall would do just about anything to get his hands on in order to save his company and the livelihoods of the people who work for him. If putting his hands on a beautiful woman will get him closer to that goal, then he’s game. Besides, there’s something about Bernadette Rowland that has him thinking she could be more than just a pawn in his grandfather’s game.

Bernadette wasn’t looking for a man, but when Connall inserted himself into her life, she didn’t put up much of a struggle. He’s sexy and smart and seems genuinely interested in her work as a wolf researcher. Bernadette can’t resist his charm and before long, she’s swept up into a world far away from the isolation and loneliness of the Montana wilderness.  But just when she thinks she’s found someone who could be her mate for life, she discovers the real reason he’s been piling on the charm, and their perfect romance crumbles.

Can two people who are worlds apart find happiness together or are they each destined for life as a lone wolf?

Grab your copy of The Billionaire’s Last Chance from:

The Beaumont Brothers is also available as a stud packed boxset!