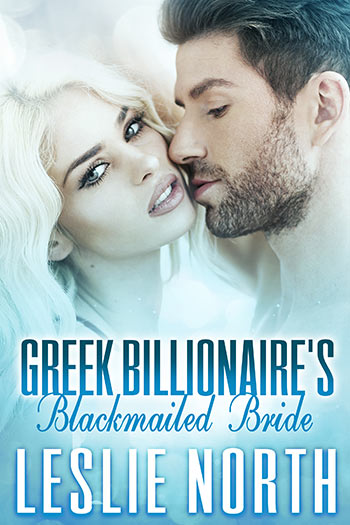 Greek banking heir Antonio Rosso is shocked when his late father leaves the beloved family villa to the one woman he never wanted to see again: Claire Bennett.

After a hot and heavy fling, things ended abruptly when she was accused of being a gold digger. But now, to hang on to the home that meant so much to his mother, Antonio will not only have to get back into the beautiful American’s good graces, he’ll have to convince her to marry him.

When a job brings her back to Greece, voiceover artist Claire should have guessed Antonio was behind it. With his entitled upbringing, she knows he’s learned to use his money to get his way. After the way she was treated though, she wants absolutely nothing to do with him. He may be even more sinfully handsome than she remembered, but if he thinks she’ll agree to a sham marriage, he has another thing coming.

Claire is determined to prove she can’t be bought or sold, and Antonio needs nothing more than a temporary arrangement. But when their spark reignites, can they ever get past the ugly history between them?

Download Claire and Antonio’s second chance love story from your favorite retailer now and start reading it in seconds:

Athens had changed since she’d been here as a student. Claire Bennett recognized the main landmarks—how could you miss the Acropolis?—but she was soon lost. The driver stopped before a modern building and she glanced up at it. “Aegis Studios?” she asked.
“Top floor,” he said. He jumped out and pulled out her luggage. “Your luggage will be waiting for you in the secure storage behind reception here.” He gave her a grin.
She shook her head but followed him inside. He gave her another grin and sauntered off with a whistle.
Glancing around she decided Aegis Studios was doing okay. Marble floors, more marble on the walls, dark wooden desks for security and reception. A guard nodded at her and led the way to a bank of elevators. He inserted a key into the elevator control, and a moment later the doors swished open.
Claire smiled at the man and stepped into the elevator. More luxury with thick carpet, mirrored walls, and all shiny brass trim that looked as if it had just been polished. “Will the director…?”
The elevator doors closed, cutting off her question. She let out a breath and rubbed her palms to smooth down her dark blue skirt.
In deference to the high humidity she’d known would be ever present, she’d changed after her flight in the airport bathroom into a light linen blouse in a pale yellow and a cotton-blend skirt. The bright yellow gave her skin a healthy glow, making it appear as if she had been spending time in the sun, when in fact she had been holed up inside her apartment for months.
Her skirt ended a few inches above her knees and the fabric was guaranteed not to wrinkle. She checked her makeup and hair in the mirrored wall of the elevator. She wore her hair long and straight these days, but Greece’s weather was already curling the ends.
She stared at herself and smiled. You’ve got the job already. Remember, just be yourself, smile, and for heaven’s sake – if they don’t speak good English ask for an interpreter! You don’t want there to be any misunderstandings.
Misunderstandings—the story of her life.
The elevator pinged, the doors opened and Claire clutched her purse strap and thought, wow.
Crystal chandeliers adorned the ceiling, casting their reflection on the marble flooring in front of the elevator. That gave way to a plush, deep blue carpet that extended the length of the hallway in either direction.
She headed to the main doors, which stood open.
The room seemed to be a large conference room. An impossibly long, highly polished wood table occupied the middle of the room with high-backed, leather chairs. Windows lined one wall, looking out over the city, and she could see the blue of the ocean in the distance. A man stood in front of the windows, hands in his pockets and his back to her. He had on a white, button-down shirt, charcoal trousers, and what looked to be Italian loafers.
She blinked, but it couldn’t be. A lot of men in Greece had that curly, black hair—and so what if his shoulders were broad and his back lean.
And then he turned.
Antonio Rosso stared at her, cool as ever, his expression calculating and calm—just as it had been the last time she’d seen him. When his father had taken her apart. Heartless bastard!
Claire took a step backwards. She lifted her hand to her throat. She couldn’t mistake that face—and those icy blue eyes. “What’s going on here?” she asked, hating how her voice had gone all husky and soft. “I’m here to meet Nick Stavos, not you.”
“No, you’re here to meet me.” He held out a hand. “Welcome to Aegis Studios—it was a new acquisition for my father, but now it seems to be mine.”

Download Claire and Antonio’s second chance love story from your favorite retailer now and start reading it in seconds: