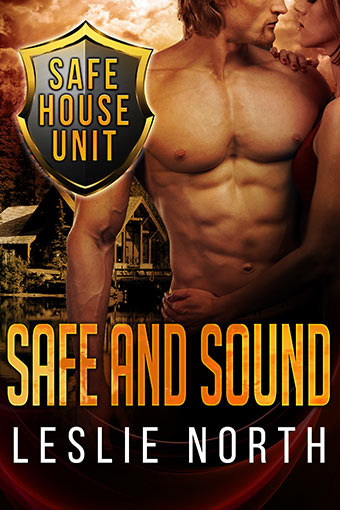 Former Army captain Max Sterling sees the world in black and white. Ever since his days in the military, it’s been his job to defend the innocent, and the elite Safe House Unit lets him do just that. But when he’s assigned to protect Adrien Baudin, a savage assassin set to testify against his mob boss employer, his moral code is shaken to its foundations.

Everything’s going according to plan until Lola Reyes, an innocent first grade teacher, enters the picture unexpectedly, bringing the unwanted attention of her policeman brother. She’s everything Max didn’t think he needed until now—beautiful, caring, and independent—and she’s packing a gun.

When Lola crashes her car at a remote residence, she believes her sexy but secretive rescuer has her best interests at heart. Relief turns to distress when he and his unnerving partner tie her up and refuse to accept her identity.

And after Max learns of a criminal conspiracy involving Baudin, they’re forced to go on the run to keep everyone—including the woman he’s falling for—out of danger. When justice and duty are at odds, he’ll have to choose sides in a game where the stakes are life and death.

Exclusive Excerpt From Safe and Sound

Lola Reyes coughed and stirred in the driver’s seat. She opened her eyes, but nothing made sense. Books that once filled a box in her back seat spilled across the dashboard in her line of vision. The radio no longer played Green Day. Her legs no longer had room to maneuver. A spasm of panic gathered deep inside her and organized an uprising through her lungs.

She tried to release a scream for help. Nothing came, as if everything but silence had been knocked free of her body. Glass shards popped free of the remaining windshield in tiny explosions. The scrap of paper she had glanced at—for just a moment, maybe two, to check the address—still crowded her fist.

An enormous man eclipsed her field of vision.

Lola recoiled, though her seatbelt still stretched taut and didn’t allow her to go far. The wide, masculine shadow became more distinct, and her rescuer’s face sharpened into focus. Judging by his size and the squared, mature angle of his jaw, she put him at a few years older than her, perhaps even circling his early thirties. His hair was a close-cropped honey brown, and the coarse stubble that shadowed his jaw appeared slightly reddish.

The doctor from Grey’s Anatomy.

His expression was anything but mc-dreamy. Possibly angry. Handsome yes, but supremely stressed.

“What happened?” She pushed the question out with difficulty as she felt the seatbelt slither off her. Her breath came up short, from the accident or the off-putting but totally arresting attention of the stranger, she couldn’t say. “Is anyone hurt?”

“You hit a tree.” The man’s voice was even, calm, totally contradictory to the way his eyes darted around the wreck and beyond as if he was looking for another passenger who had fled into the woods. “Do you feel any pain?”

“My legs are crunched.”

In one effortless scoop, the stranger’s hands slid beneath her bottom and lifted her clear of the seat. Lola wasn’t a waif by any means—in fact, she was blessed with the curvy figure of her Nona, Rosita Reyes, a burlesque and Broadway dancer from the 1950’s—but the man drew her out as if she weighed as much as a plume in a glittery headpiece. He loaded her into his arms, hefting her once to get a firm grip, and carried her across the woodsy front lawn and up the steps of the lone residence. Just as he seemed about to balance her on his thigh while he grappled with the door handle, someone inside the house opened the door.

“Who the hell is this?” Another man demanded, his voice an odd blend of sophistication and savage. The second stranger was average height, built lean and hungry. His veal-colored lips looked like a deflated tire wrapped around an unlit cigarette.

Her rescuer deposited her gently on the living room couch, careful to support her neck against a roll pillow. When he turned to respond to his companion, all the care had vaporized from his countenance.

“I told you to wait in the cellar,” said McGinger. “But while you’re here, you might as well make yourself useful and watch her. I’m going back out to the car. Make sure she doesn’t close her eyes or go to sleep.”

“You leave me alone with a stranger?” said the smoker.

“She’s unarmed. I checked. And concussed. She’d have to be superhuman to fake pupils that big.”

“Not impossible if well-trained.”

The smoker sniffed. French accent. Definitely French. His fingertips continuously moved toward his nose. Tweaking. Itching. Fidgeting. Lola had seen the same during an in-service on how to spot drugs in schools. A sliver of unease inched along her spine, sore ass to sore neck.

“Something tells me you can handle yourself,” said McGinger. “Back in a minute.”

He disappeared out the front door.

No-no-no, don’t leave. The sliver grew as big as a splintered plank and settled in her gut. She much preferred the company of her rescuer, but who was she kidding? If the guy who smelled like ash was strung out, most likely McGinger was, too.

Cancer-man paced along the rug, lit up and puffed away like a chimney. He wore gold-toe executive socks like a business man, but his button-up shirt screamed auto mechanic.

Lola’s head spun in the wake of his movements. She closed her eyes, sank deeper into the sofa’s puffy, leather cushions, and raised her palm to her forehead. Her bracelet collection jangled, wrist to nose. The noisy intrusion niggled from her eardrums straight to the epicenter of her massive headache. She winced and rose on her elbows to remove them. Blood smeared her palm.

“I’m bleeding,” she said to no one, especially not Pepe Le Pew.

Her words acted as a summons. He ambushed her in one nervous, carcinogenic wave that flipped her stomach. Her tear ducts surged into action.

“Let me see your eyes,” he demanded.

She burrowed deeper into the couch. A litany of responses begged utterance: no; not in a million years; get the hell away from me—you smell like a chimney; maybe for your hot friend. Before she could decide on a prudent answer, the door opened again.

The smoker moved away.

Her red-headed rescuer deposited her purse on the coffee table and lowered into an armchair across from her.

“What’s your name?” he asked her, none too politely.

Was this a test? He could have figured that out from her wallet.

“Lola. Lola Reyes,” she said as she struggled to a seated position. Her head felt like it had been clocked by a bat. “What’s yours?”

“You should not have involved yourself in this.” This more like dis on the French man’s tongue.

Lola wasn’t entirely certain to whom he directed his warning.

“Someone would come looking for her,” said the red-head. “Cover blown.”

“I’m right here,” said Lola, with a little too much attitude. She remembered the drug thing and dialed it back a bit. “Fully conscious. No need to pretend otherwise.”

“How are you feeling?” McGinger asked.

“I’m all right now.” She reached for her purse and rifled through it for her bottle of aspirin she tapped into on indoor recess days. The room tilted on an invisible axis. Two shakes of an open bottle in her palm, she continued, “Really. I appreciate all your help, but I really need to call my insurance agent.”

The men exchanged a look she couldn’t decipher. Either they’d had a bad experience with an insurance man in their past or the thought of her calling—anyone—set them on edge.

Which, in turn, had her stomach crumbling like a tower of alphabet blocks.

Oh, god. She’d call her brother instead. Pretend it was her insurance agent. He’d know something was wrong and bring back up.

“Some water for the lady,” requested McGinger. Not really a request so much. More like a thinly-veiled order. The French man’s stare could have launched poison darts, but he shuffled around the countertop and filled a glass from the tap.

Had she not witnessed every ounce of that water drain from the faucet she would not have used it to wash down the pain pills in her hand.

“When I found you, you were unconscious,” McGinger reminded her. “I wouldn’t call you ‘all right’.”

The hard angles of his eyes softened a bit. In another lifetime, when circumstances didn’t make her want to tap into every Criminal Minds episode she had ever binge-watched, his concern would have tapped into her hair-trigger aww response. Dispensing six Band-Aids a day does that.

“Really,” she reiterated. “I’m fine. And I’m late for an appointment.”

“What brought you all the way out here?” Max inquired.

Just like that, the walls were back up between them. It was an innocent enough question, but when he added, “There aren’t any other houses around for miles,” Lola’s hand went straight back to her purse for her cell phone.

One thought on “Safe and Sound (The Safe House Series #3)”