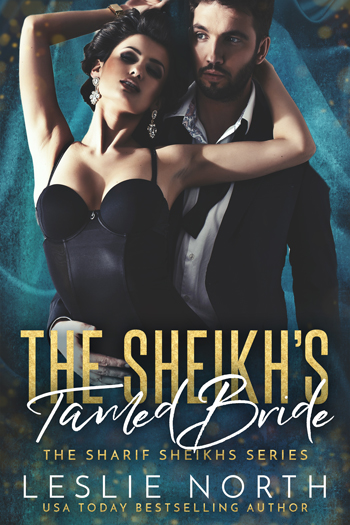 Rashid Sharif has never apologized for his wild lifestyle, but after one scandal too many his family is fed up with his playboy ways. He’ll agree to his brother’s outrageous demand that he marry, but it won’t be to some wallflower as his conservative family would prefer. If he’s going through with this farce, there’s only one woman he’ll take as his wife—his sister-in-law’s American friend Mila. She’s a rebellious little thing, with fiery passion simmering beneath her icy exterior. Although Mila’s never been more than coldly polite to him, Rashid will do what it takes to win her over.

Mila’s always been a wild child, but when she chose to follow her dreams to Dubai it wasn’t to work as a glorified waitress. She needs a chance to get ahead, but when that opportunity comes, it’s not a job she’s offered—it’s a marriage. Rashid Sharif is ridiculously handsome, richer than sin…and a complete player. Mila wants nothing to do with the womanizer, even when he offers her more money than she could make in a lifetime. But when the notorious bad boy begins to play nice, Mila finds it hard to resist temptation.

As Rashid works to woo Mila, a simple seduction suddenly seems like something more. But can she ever trust the sinful sheikh, or will Mila always worry that Rashid is only playing games with her heart?

Grab your copy of The Sheikh’s Tamed Bride at:

On the top floor, the elevator opened to the hallway leading to the prestigious luxury suites. A peppy beat was causing the walls to vibrate, and Rashid sighed. It appeared that his two friends weren’t just drunk. They were having a party.

He pounded on the door with bruising force and then crossed his arms, waiting.

Arvio swung the door open and grinned at him. “Hey! Rashid is here! Now the party really can begin.”

Glancing into the room, Rashid frowned. Arvio was stark naked, and there wasn’t anyone else in the room. “Get Karam and put some clothes on. You’re leaving.”

“Oh, we can’t leave yet,” Arvio whined. “Things are just starting to get good. Wait until you see the surprise we have for you.”

He skipped drunkenly through the common area and into one of the bedrooms.

Ready to throttle his friends, Rashid followed, only to stop dead at the sight before him. Karam, taking a break from his bedroom activities, languished by the window. It wasn’t the naughty scene before him that made Rashid panic but the two women in the bed.

He recognized them instantly because he’d met them only days ago when he’d attended with his father and brothers the international conference that was hosted in Dubai every year.

The bedmates weren’t hookers. They were the daughters of prestigious Italian and Polish diplomats.

Enraged, Rashid brought his fist around and hit Arvio squarely in the jaw. “What were you thinking?” he bellowed. “If their fathers find out, there will be hell to pay!”

The girls shrieked and covered themselves. “How are they going to find out unless you tell?” the gorgeous Italian asked, her voice slurring more with every word.

Rashid searched his memory for their names. The dark-haired Italian beauty was Valentina Ricci, and the Polish blonde bombshell was Ania Kowalski.

“The press have been following you ladies around all week. Do you really think they wouldn’t spot you with Dubai’s most notorious playboys?”

Arvio, holding his aching jaw, glared at Rashid. “Do you really think that we wouldn’t take precautions? What’s happened to you? You used to be one of us. We brought you here to have a little fun!”

“This isn’t fun for me, not anymore. I have to uphold my family’s reputation,” Rashid growled. “Now get dressed. We’re taking these women home before this gets even more out of hand.” He found Arvio’s pants and threw them at him. “Now.”

Stalking out of the bedroom, he slammed the door behind him. He couldn’t remember ever being so angry in his life. Gritting his teeth, he did his best to straighten up the hotel room so the managers wouldn’t be too upset. Luckily, his friends must have understood because a few minutes later, all of the would-be revelers paraded out with shame in their eyes. He swept them with a stern look before herding the four out of the suite.

The elevator ride was quiet all the way down, but when they stepped out of the elevator, all hell broke loose. Flashbulbs went off in their faces, and questions filled the air as a handful of reporters rushed them, their cameras pointed right at them.

Oh dear! Is Rashid going to in big trouble? Find out in your copy of The Sheikh’s Tamed Bride! It’s now available at: